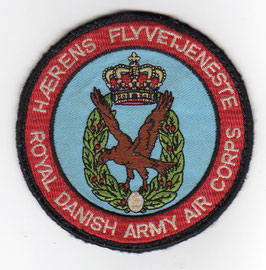 It operated the Army helicopters as well as the Saab T-17.

In 2003 all its helicopters were transferred to the Royal Danish Air Force under the control of Eskadrille 724. The disbandment makes this patch a pretty rare item!


Patch is in very good condition.

All pictures, photos, graphihcs, scans etc. are copyright protected!! Permission to use can be obtained on request!